There has been some exciting happenings since we last checked in with everyone’s favorite bacon-lovin’ philanthropist, The Bumblesnot, and his funny cast of characters.

(For a quick refresher, we have Bumble on the left, The New Kid in the middle, and The Wee One on the right.) 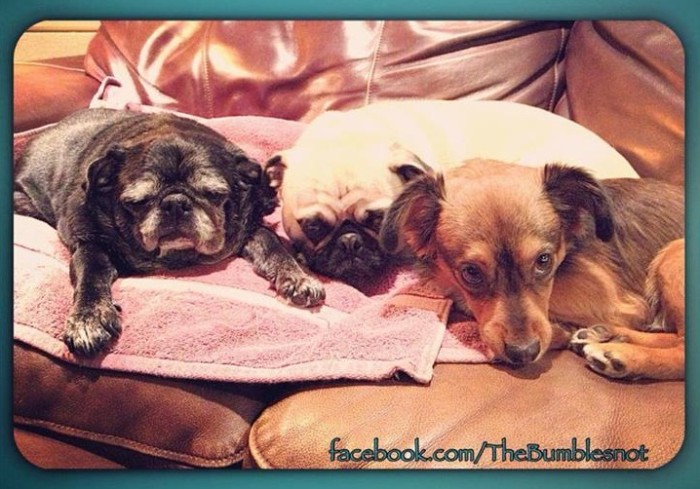 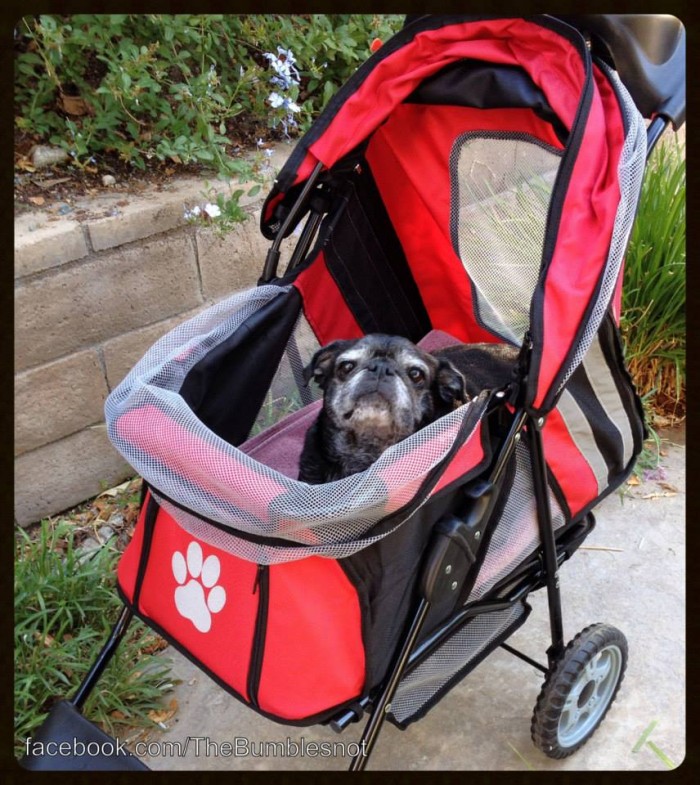 “They see me rolling…” 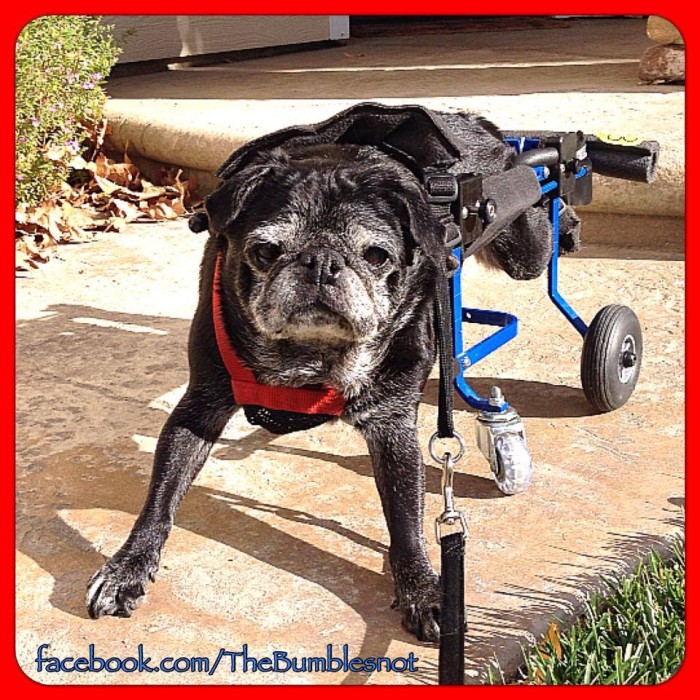 The Wee One did the responsible thing and got himself neutered … 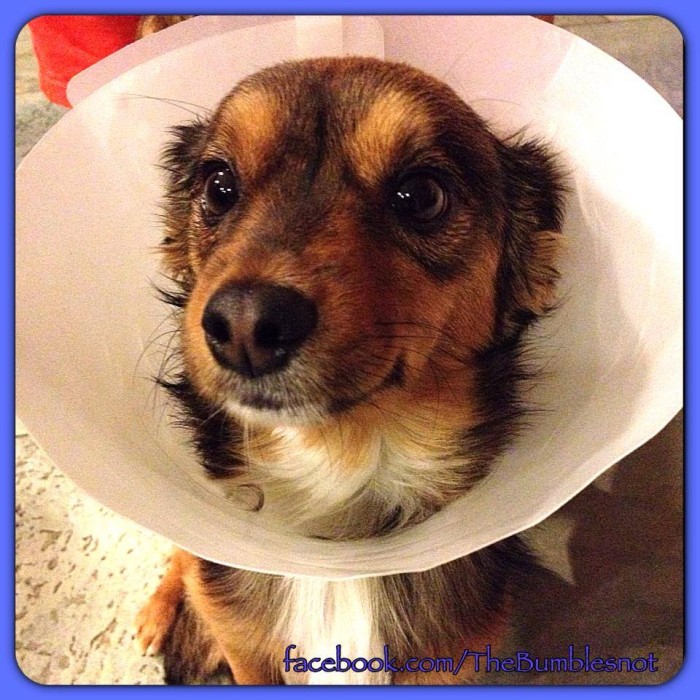 The Wee One works his cone

The gang has been visited numerous times by a mobile groomer … 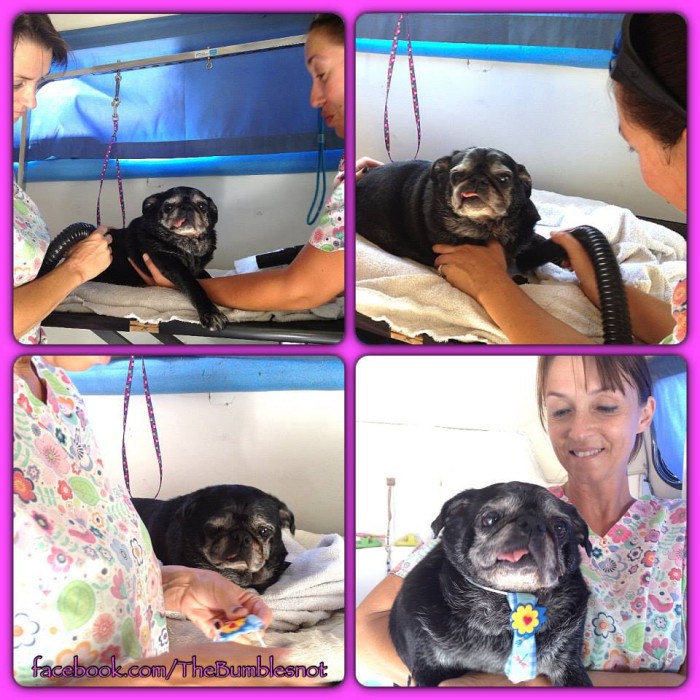 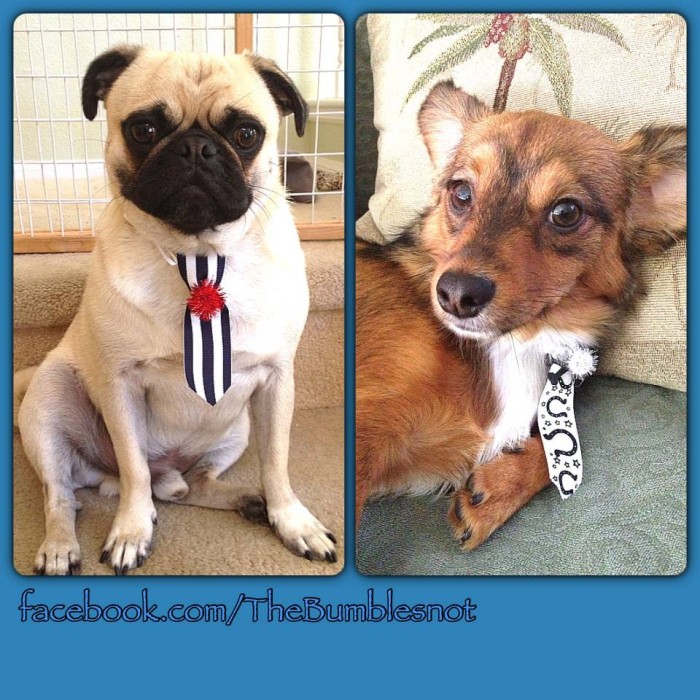 The New Kid and The Wee One rock their ties…

And the biggest news of all … The Bumble Gang adopted a Pug sister, Penny! 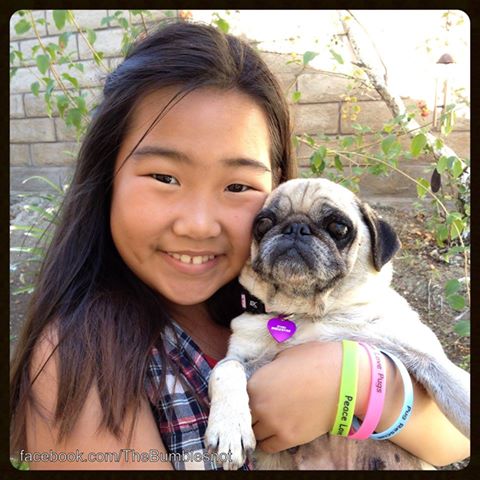 The Little Girl and Penny on her first day home.

Known as The Itsy Pug, or TIP, she came to the crew from Central Coast Pug Rescue. She was given up by her owner/breeder after her last litter of puppies had died. Thankfully, she was rescued and spent a month with a lovely foster family. 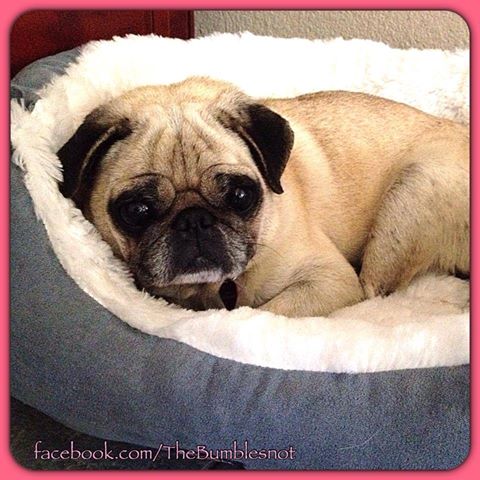 Her age is a bit of a mystery; her previous owner said she was four, but several vets put her between six and eight. 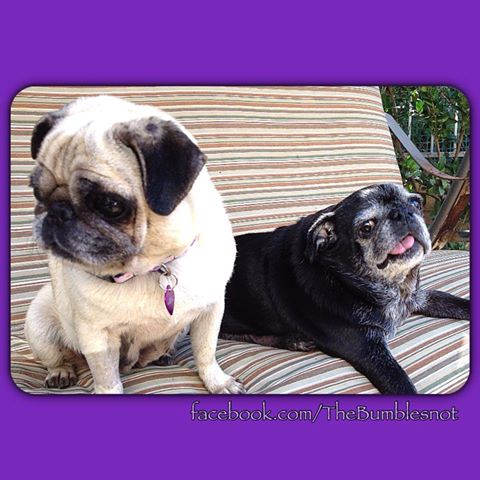 Itsy & Bumble get to know each other

Whatever her age, this petite 12 pound girl has a lot of spunk. If The New Kid (the other fawn pug) and The Wee One start wrestling, she will insert herself between the two of them because she thinks The Kid is hurting The Wee One. The Kid is terrified of her. 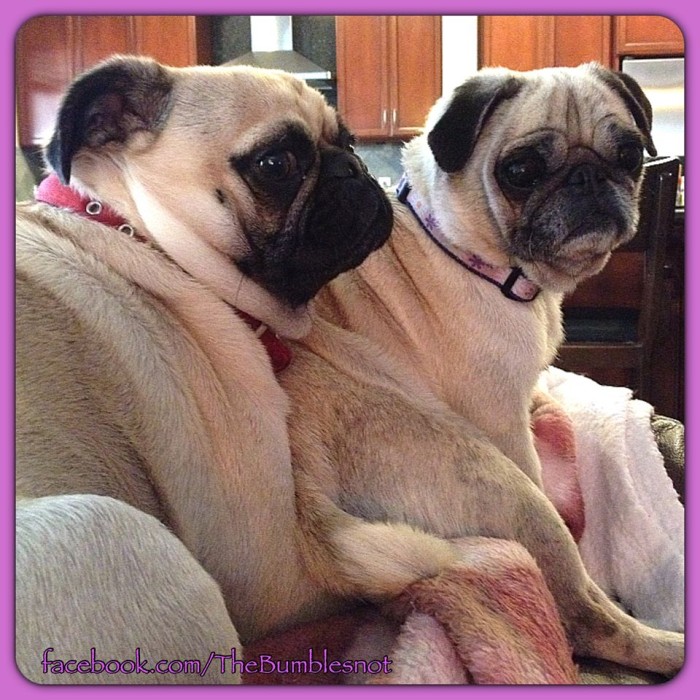 The New Kid and Itsy in a rare moment of peace.

Look at her. So oozes toughness!

The Wee One is in love with her. Can you blame him? 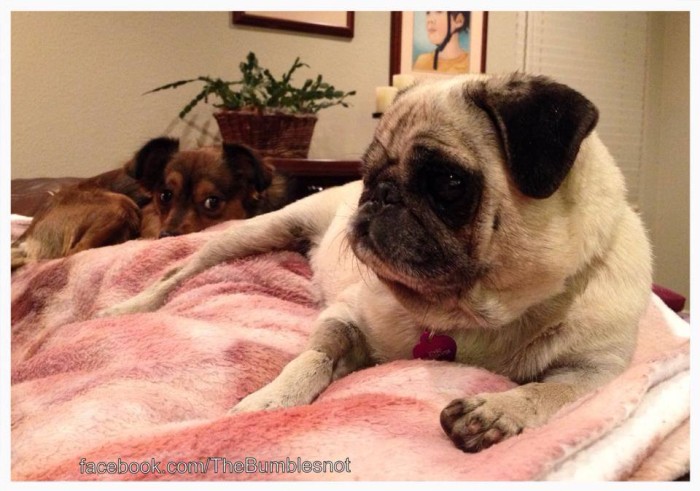 She runs the household now, but she knows it is better to leave Bumble alone on his sofa. 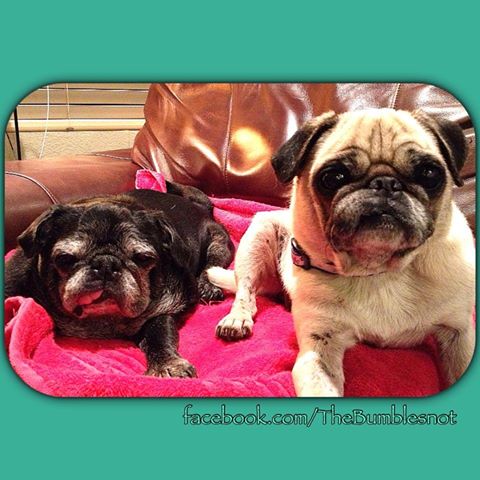 Like a lot of rescue pups, she does come from an awful past. Sometimes she will wake up, run around the house and fall back asleep. Or she will wake up barking, not knowing where she is and needing to be soothed back to sleep. Her humans, of course, adore her and hope she will be able to forget about the past. 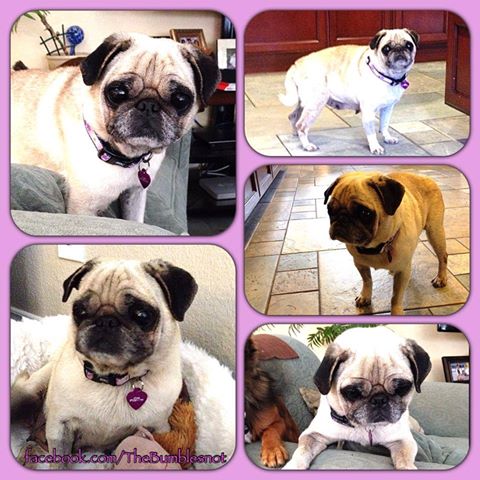 We are so happy that Penny has found such an awesome family! And of course you couldn’t ask for a better trio of brothers — The Wee One, The Bumblesnot and The New Kid. 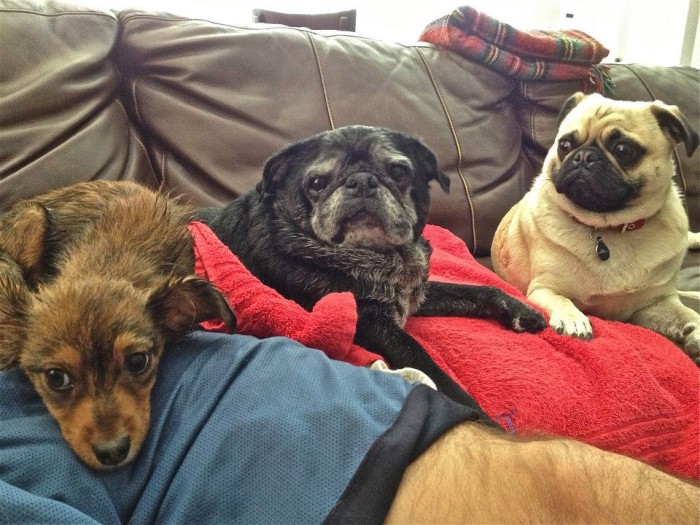 Welcome home, Penny aka The Itsy Pug aka TIP! 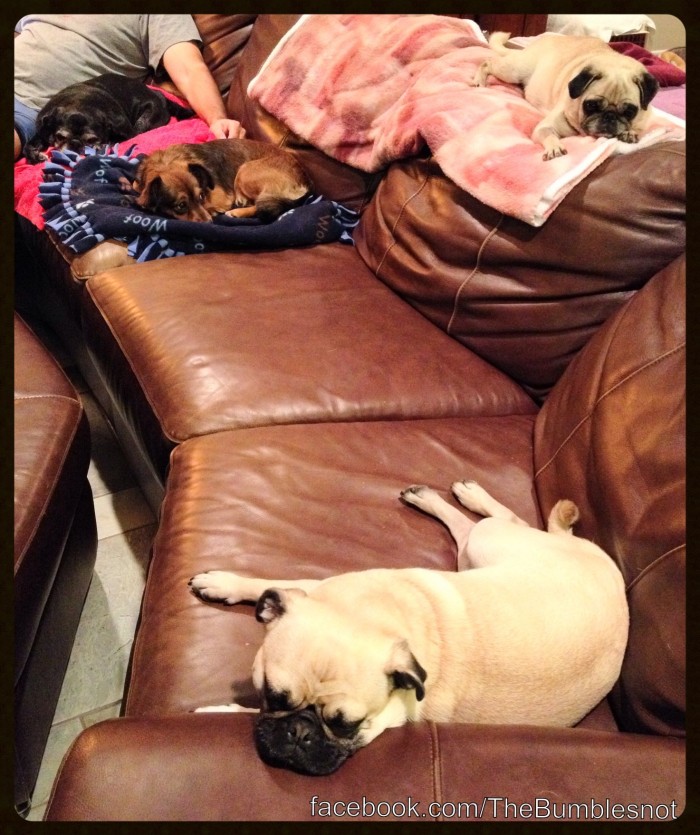 The whole gang relaxes on the couch.

(all photos are from The Bumblesnot’s Facebook page)
Comments
Want to read more stories?
Sign up & unlock all stories & get the best pup shenanigans each week!