You can’t help but fall madly in love with a dog who goes by the name, “The Bumblesnot.”

The Bumblesnot is a ten-year-old pug with sass, class and gas. His Facebook followers are very loyal and and he has an incredibly supportive cast of characters: The Dark Haired Lady, The Tall Man, The Little Girl and The Bald Man, each of whom opened their hearts to Bumble in Feburary, 2011. 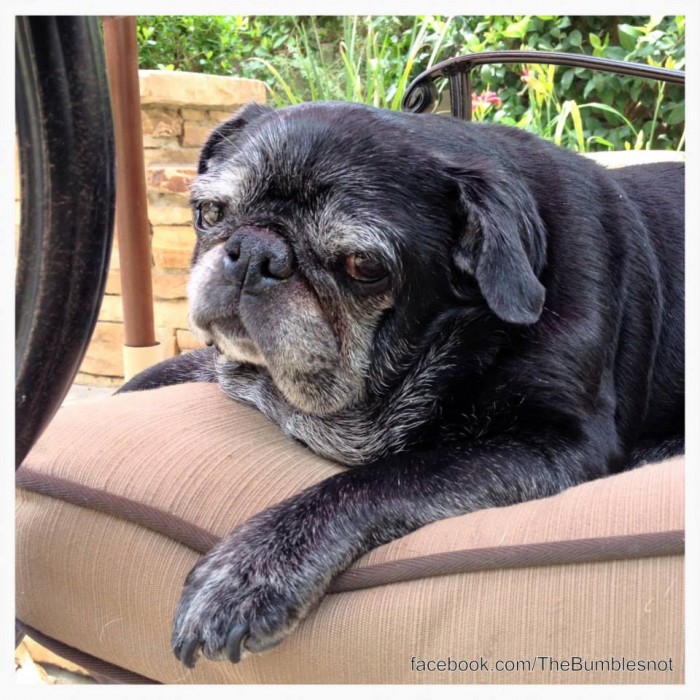 Bumble is also known for being a ray of sunshine on Facebook. He is known to leave fellow dogs poems of support and congratulatory photographs when they achieve a milestone on their page. His humans also leave Bumble heart-melting poems. 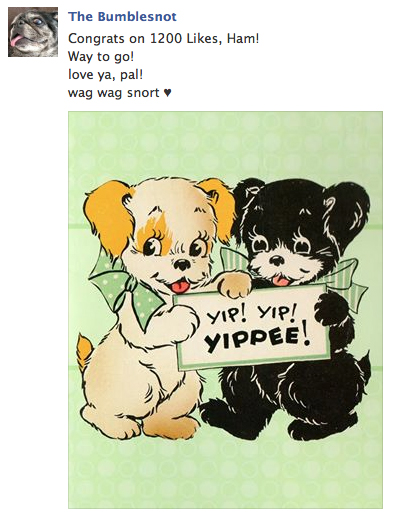 Bumble is always there with kind words

Like many shelter dogs, not much is known about Bumblesnot’s past. Previously known as Buddy Love, he was dropped off at a shelter in California after his owners said his care was too difficult (Buddy’s owner before that had passed away).

While Buddy was adjusting to shelter life, The Dark Haired Lady (aka TDHL) was looking for a new companion dog. It was love at first snort. Any concerns about age and health were erased once Buddy waddled out of his cage and onto her lap. After a nerve-wracking week of waiting to see if his previous owners would claim him (he had two microchips), TDHL rushed down to get Buddy and take him to his new home. 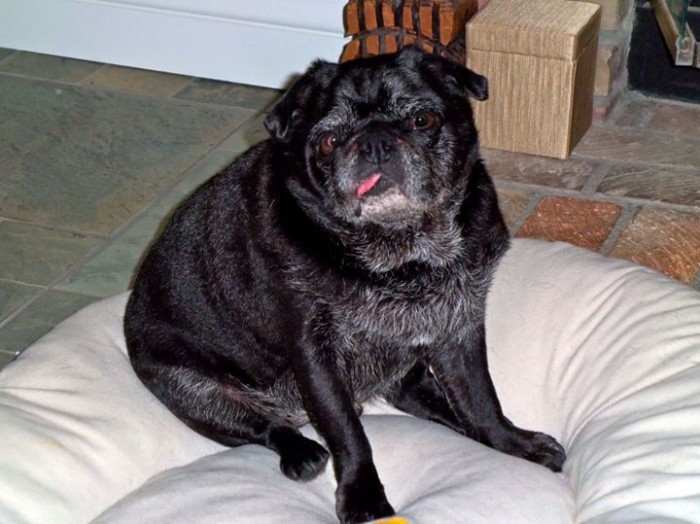 Much to Bumble’s disappointment, the plump pug was immediately put on a diet. His previous owner neglected to properly take care of him which resulted in ear mites, two eye infections, rotten teeth (three of which had to be pulled), and nails so long that they curled up into his paw pads. After he slimmed down and his ailments were attended to, Bumble began to drag one of his rear legs. 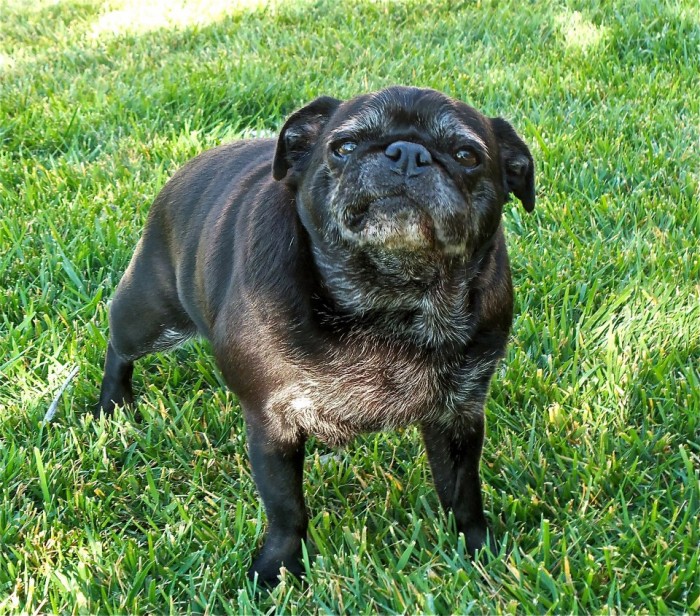 Bumble back when he could stand on his own

Bumble’s new family decided against surgery since his x-rays were inconclusive and he’d already been through enough. So, Bumble went online and purchased himself a fabulous K9 cart. He could still walk and stand and this point, but he enjoyed the added stability of the cart. He still uses it to this day. 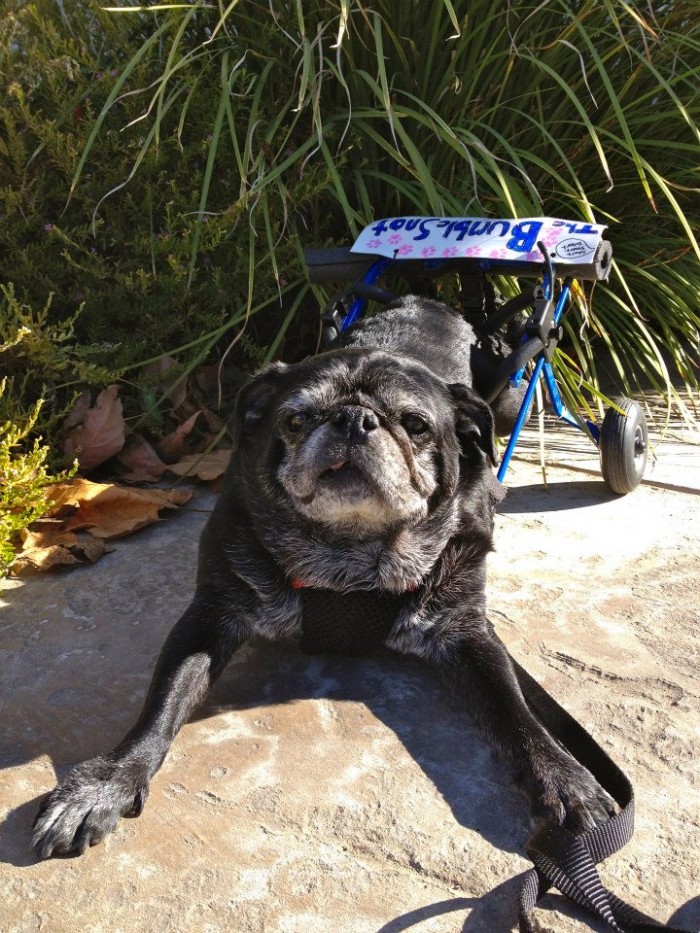 Nowadays, he still goes for walks, and has two incredibly strong front legs to prove it. Living the life of a king, he is hand-fed since it’s difficult to for him to use a bowl, and needs to have his bladder expressed since he can’t pee on his own. 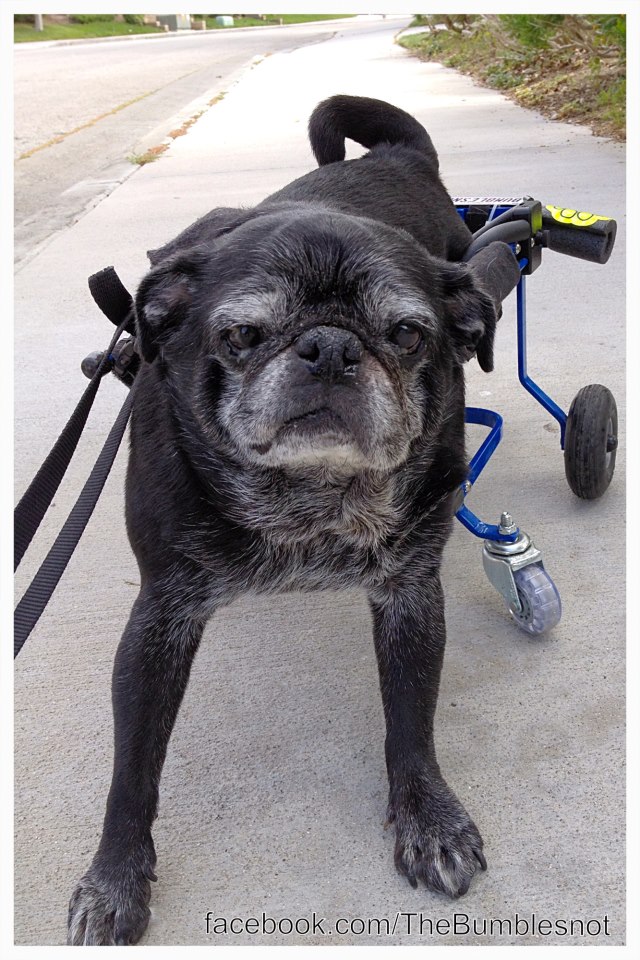 Despite these hardships, Bumble is sweet and friendly and loves to cuddle up next to his family on the couch (always with a towel). Like any dog, he has his grumpy moments and might bark until he is greeted. 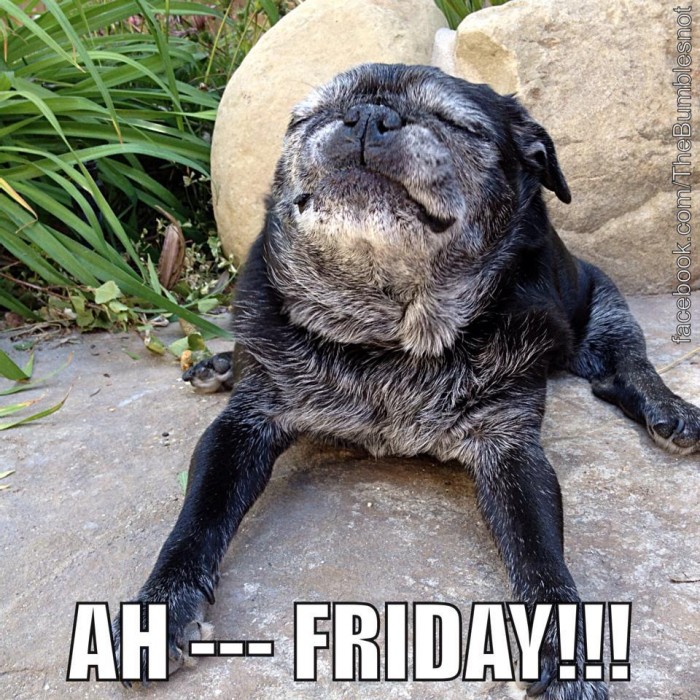 Where did the name The Bumblesnot come from you ask? The Tall Man was never on board with the name, Buddy Love, and wanted to give him a name that suited him. Since Buddy “bumbled” around and made more noise than your typical pug, “The Bumblesnot” was coined. 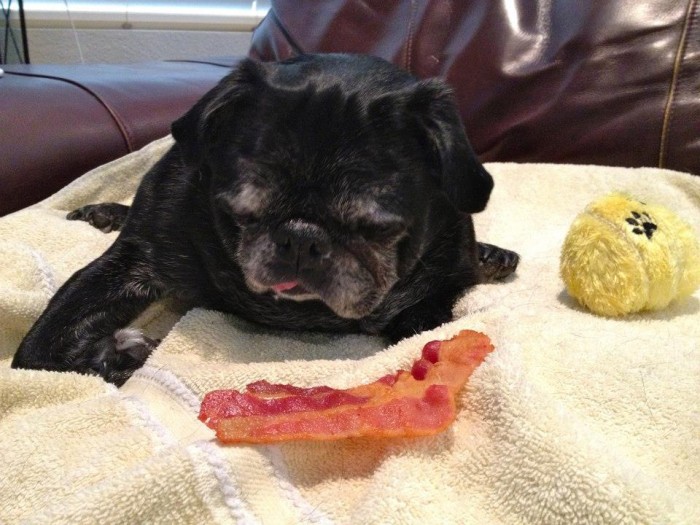 Nothing keeps Bumblesnot from bacon. Nothing. 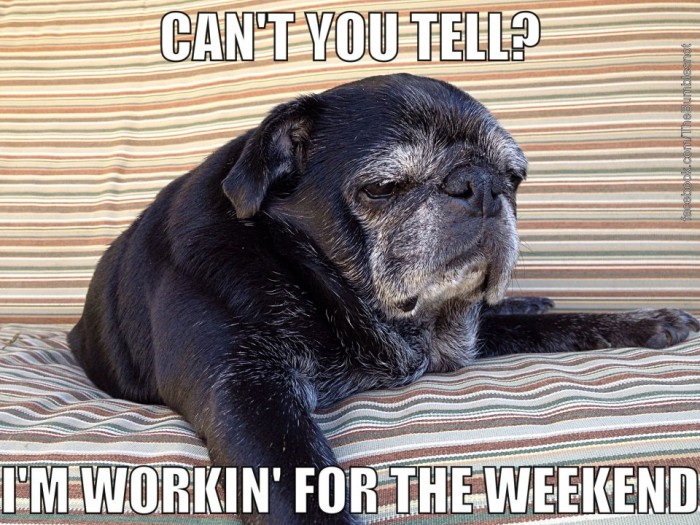 Bumble is quite the entrepreneur and philanthropist. He has an online shop with goodies ranging from coffee mugs, bags and t-shirts and donates all the proceeds to pug rescue organizations. He’s big on rescue and uses his Facebook page to spread the word about the importance of adoption and urges people to consider a senior animal when adopting. 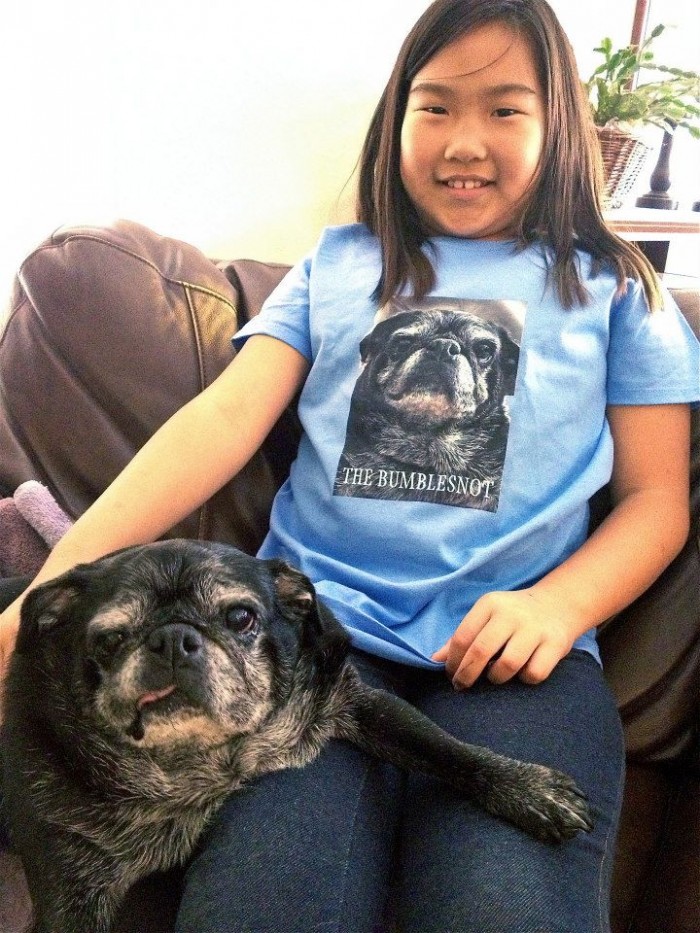 Bumble and The Little Girl showing off some swag

Not only does Bumble have a supportive bunch of humans, but he has two dog siblings. Kato (aka The New Kid) is a fellow puggy and has been with Bumble since March 2012. And just this year, Bumble’s human brother found Marc Antony aka The Wee One, a Dachshund and/or Chihuahua or Shetland Sheepdog mix, wandering a parking lot.  Naturally, he became part of the family. 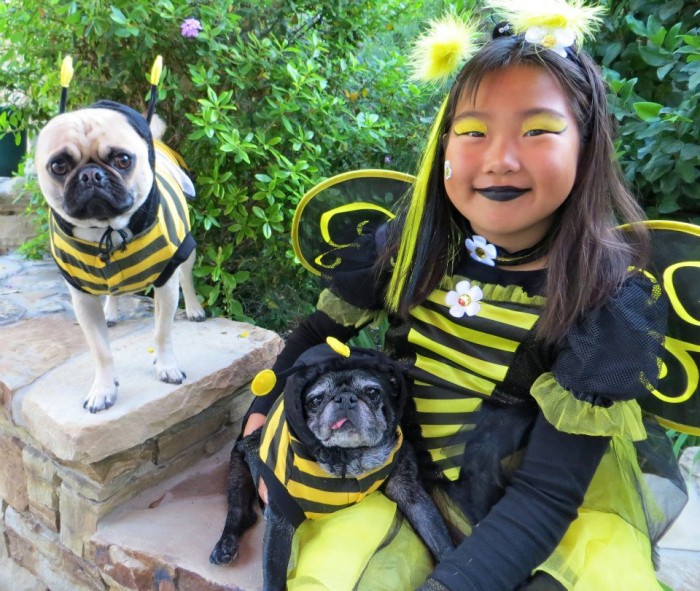 The New Kid, Bumble and The Little Girl at Halloween 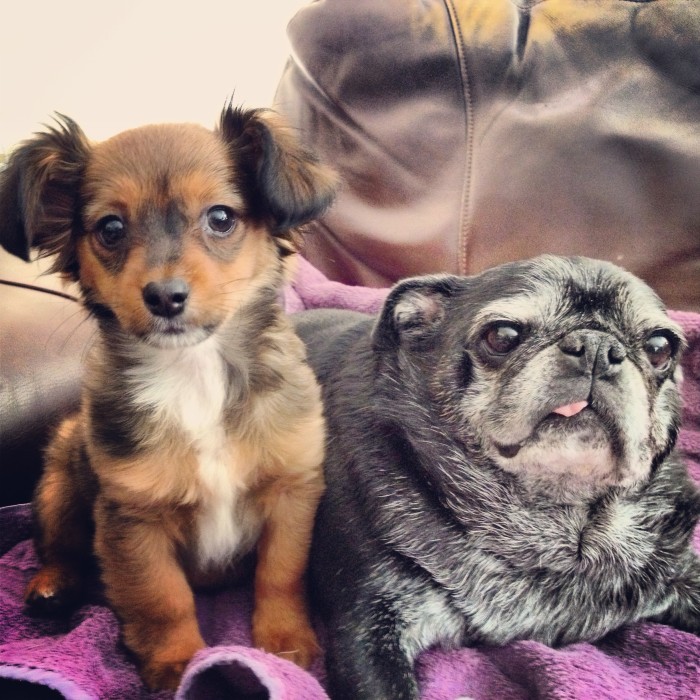 The Wee One and Bumble

We are so glad The Bumblesnot found himself such a wonderful and loving home. You can show your love for Bumble by become his fan on Facebook or by sporting some Bumble gear, (while supporting pug resuce!) 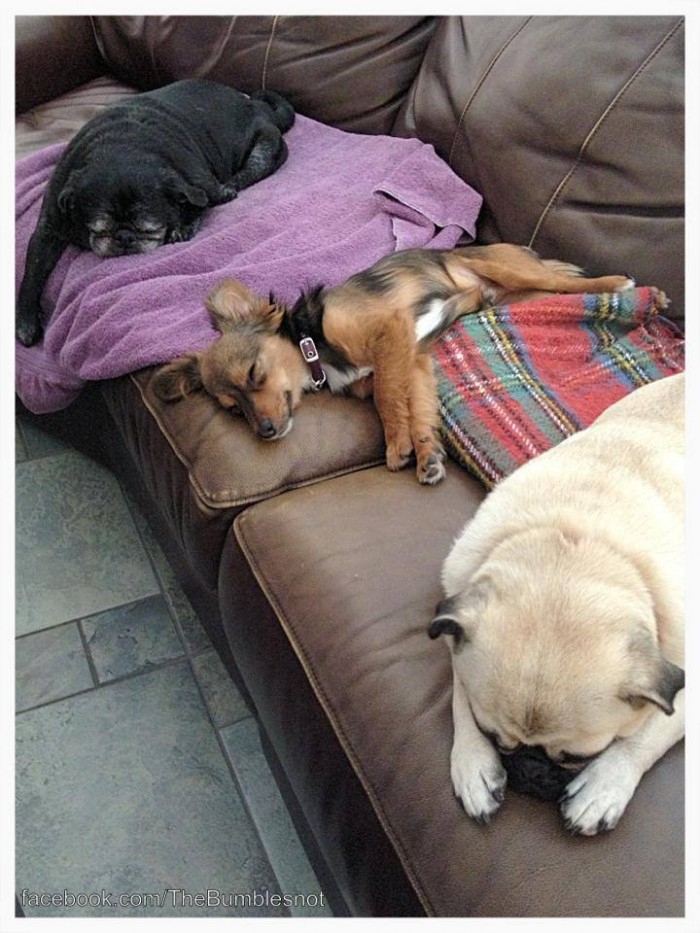