*Update April 2015: A few more pups have left this world, but still one of the most beautiful stories of hope, survival, love, and triumph.*

In honor of national Dog Fighting Awareness Day through the ASPCA, we wanted to feature a few pups who overcame all the odds and proved that these pups are not vicious killers– they’re just regular dogs who’ve been put through extreme circumstances.

The pups we’ve featured below are a few of the “Vicktory Dogs,” the dogs who were rescued from Atlanta Falcon Michael Vick’s dog fighting ring back in 2007. When the dogs were discovered in Vick’s home, many people said even though the situation was horrible, these dogs should be put down because of their obvious violent natures and killer instincts. Aerial shot of Michael Vick’s home with the dogs out back. Photo from Pilot Online

Organizations like the Best Friends Animal Sanctuary stepped in and tried to argue that there was still hope for these lost creatures.

Almost 8 years later, the Vicktory dogs have some incredible stories of perseverance and hope. Best Friends Animal Sanctuary took in 22 dogs and set out to prove that these dogs could be turned around– they could live normal lives in cozy homes. Below are snippets about 9 of those pups, snippets that show the flexible, fiercely-loving natures that live inside every dog.

1. Cherry
Cherry went from a dog who slept with one eye open to a cuddly pup who goes to events and gets the word out that abused animals aren’t inherently evil. People watched him grow as one of the tough pups on the show “Dogtown” and now he’s a bit of a celebrity. Even though he was bred and taught to fight, today that’s the last thing he wants to do. He prefers constant snuggles with his family– including his canine sister and his cats. 2. Georgia
One thing that surprised Georgia’s adopter, Amy, when she came to her new home was how quickly Georgia adapted to a loving family life. Georgia’s favorite thing to do was go on walks and she taught Amy powerful lessons on forgiveness, love, and learning to trust again. (Georgia passed away in 2013 but her legacy will always live on.) 3. Halle
Halle’s story continues to reiterate that no one should give up on a dog because of their past. Today Halle lives with two dog brothers and constantly plays with them. One of her brothers climbs on Halle, sits on her, bites her back legs to play– and she hasn’t gotten angry at him once. Whenever she sees another dog, her tail starts wagging and she does a happy dance. The first Vicktory dog to be adopted, Halle and her human started a dog enrichment program for shelter dogs called Halle’s Enrichment Club. 4. Handsome Dan
When Handsome Dan first came out of Michael Vick’s home, he was very skittish and fearful. As he’s grown older, Dan learned how to be more trusting. In 2010 his family welcomed a baby (human) sister to the family and Handsome Dan, like many pitties, was the pawfect nanny dog.

Today Handsome Dan has a dog rescue named after him and he has his own Facebook page with almost 600k likes. Handsome Dan also received the 2014 Barkie Award for the Best Dog on the Internet! 5. Little Red
The five years Little Red spent in Michael Vick’s dog fighting ring, she was used as a “bait dog.” “Bait” animals are animals used to test a dog’s fighting skills– dogs like Little Red are often mauled or killed in the process. Little Red’s owner, Susan, never thought that Little Red needed to be rehabilitated, instead the pup needed time to recover. After being rescued from the dog fighting ring, Little Red lives a life full of treats and zooming around 6 acres of pasture. 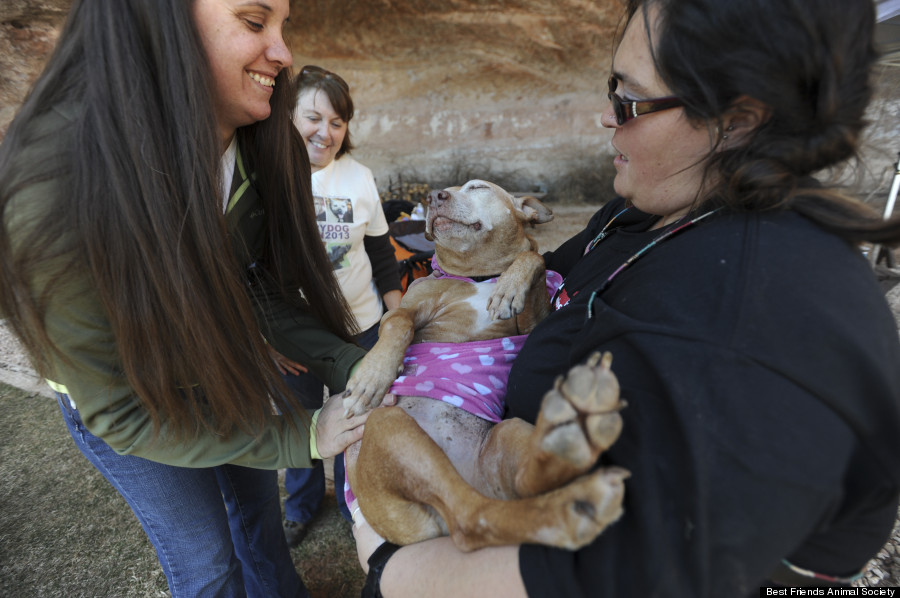 6. Oliver
The thing that Oliver’s adoptive parents were most surprised about after they brought him home was how willing the Pit pup allowed his new family to love him to pieces. Oliver had no fear in his new home or surroundings, despite the fact that his original evaluation stated that he was extremely fearful of people. Oliver would jump on his mom Erika’s lap and shower her with kisses.

Oliver passed away from cancer in 2009. He died in Erika’s arms. 7. Squeaker
When new people meet Squeaker they continuously say, “Wow I can’t believe a former fighting dog is so sweet.” Even though the beginning of her life included violent interactions with dogs, today Squeaker lives with her adoptive human family and their pack of 6 additional pups. Her adopter says that “Squeaker also stares at you like she is in love with you. Her eyes are filled with love and tell a story.” 8. Mel
Richard Hunter, Mel’s adoptive pop, was a radio show host in Dallas back in 2007. Richard reported on the gruesome details of the Michael Vick dog fighting story and became emotionally invested in the well-being of the pups. When the opportunity came to adopt one of the Vicktory dogs, Richard jumped at the chance and drove to pick up a very scared Mel at the Best Friends sanctuary in Utah. Today Mel continues to recover and goes on car rides and sleeps on the pillow with his pop. 9. Oscar
Oscar’s mom, Rachel, never set out to adopt a Vicktory dog. She just wanted a Pit Bull. But after Oscar came into her life, Rachel realized she didn’t just adopt a dog. She herself was adopted into the Vicktory dog family where everyone stays in close contact swapping stories, advice, and support to spread the word that unconditional love, forgiveness, and a bit of understanding goes a long, long way. 10. Curly
Curly still lives with his Best Friends family as the head dog over at the Dogtown Management office. Although he still struggles a bit when in unfamiliar territory, he is gaining confidence with the help of his best dog pal, fellow Vicktory dog Mya. In the summertime, Curly enjoys splashing about in the pool. 11. Layla
Sweet Layla passed her Canine Good Citizen test in February 2013, which is a huge deal for the fearful pup who had trouble relaxing due to her past. When she first arrived at Best Friends, Layla would shy away from people, but today she has her own Facebook page, where fans can follow along on her journey through recovery.