We’re so excited to promote + highlight Nina Huang in this post, if you want to support her Kickstarter project, click here!

For Nina Huang, the path to become an animal portraitist was a bit curvy. Nina’s been painting since she was 14 when she first picked up a brush, but despite her fierce love for painting, Nina was hesitant to pursue a career in the arts because her well-meaning family made her believe that it wasn’t a realistic career path. Today Nina lives in Portland, Oregon with her husband Barry and their rescue pup Apollo, but she’s got an incredible story of how she got there. 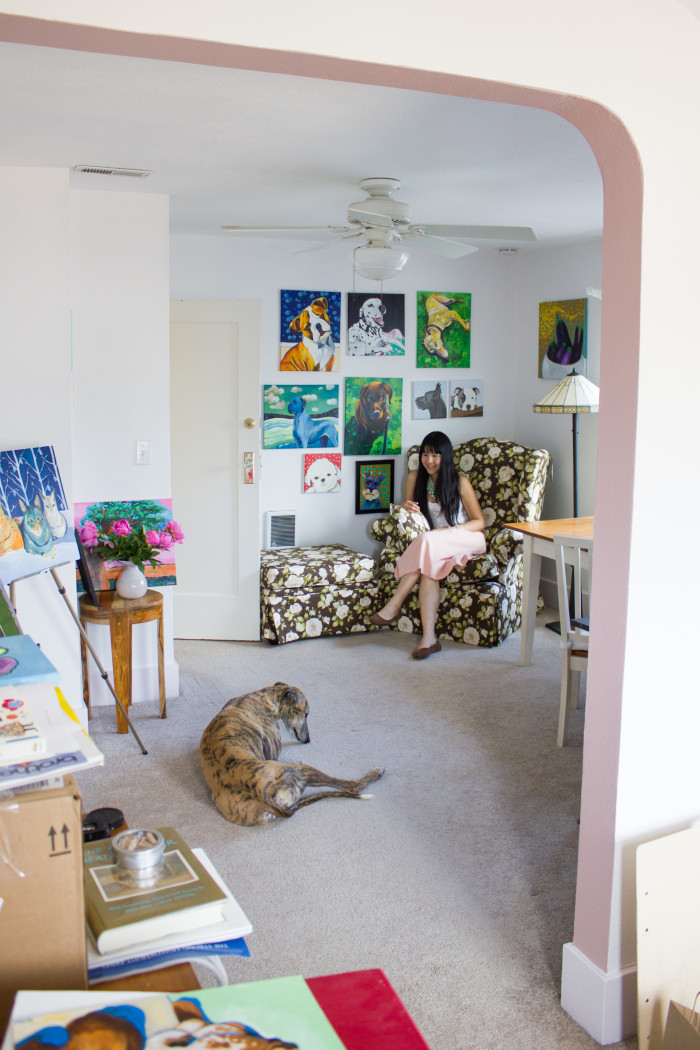 Nina was born in Taiwan, raised in China, and immigrated to Canada for college. After college, Nina went on to train as a social scientist at Harvard to get her Master’s degree in sociology. 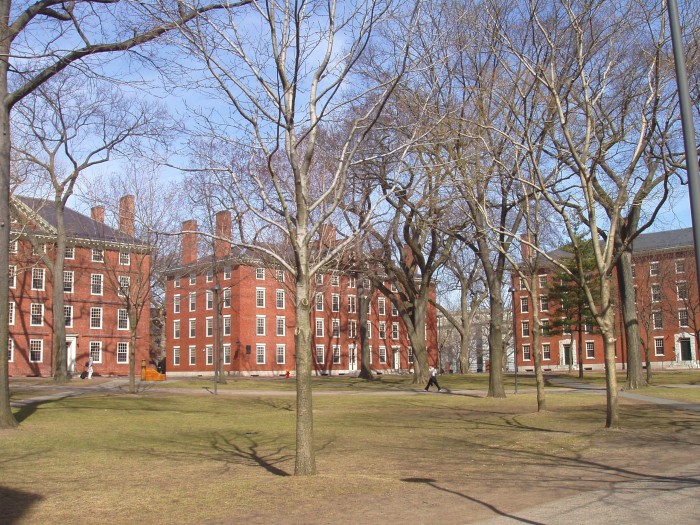 While she was at Harvard, Nina worked as a teaching fellow for two years while she painted on the side. As she was finishing her PhD, she started to feel like she couldn’t go on. Her path didn’t feel right and she reexamined everything in her life. 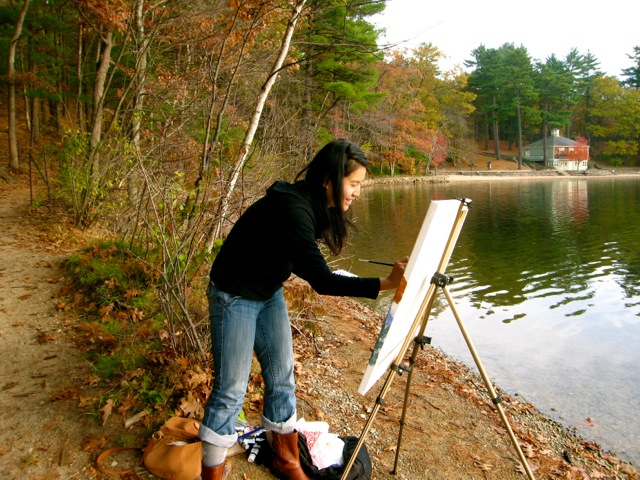 Nina believes that life is always nudging people to follow their hearts’ truest desires, and in her case, this was painting. During the tumultuous time after she left Harvard, Nina and Barry took a life-changing trip to to a Greyhound rescue in Massachusetts, “Just to take a look.” They had been talking about adopting a rescue Greyhound, but weren’t sure if they were ready to take the leap yet.

But the moment they met Apollo, they knew there was no way they couldn’t bring him home. Since Apollo was used as a racing dog, he was raised on a racing track in Florida. He had been crated for 18 hours every day and was only let out to race, to eat, and to relieve himself with the other Greyhounds. When Nina and Barry met Apollo, he was two years old and had only run 11 races. 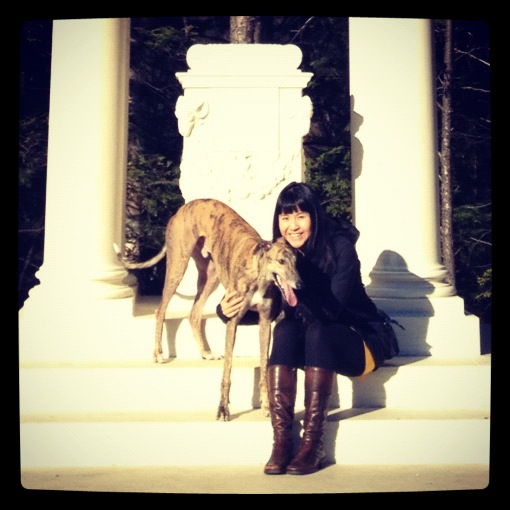 When they first started taking care of Apollo, Nina and Barry learned that Greyhounds are a lot like puppies in terms of life experience. They don’t understand treats, cars, stairs, toys… They are scared, timid little creatures and you have to teach them how to be a dog. It was a long journey, but today Apollo plays with toys and even plays a bit of tug-of-war with Nina and Barry. 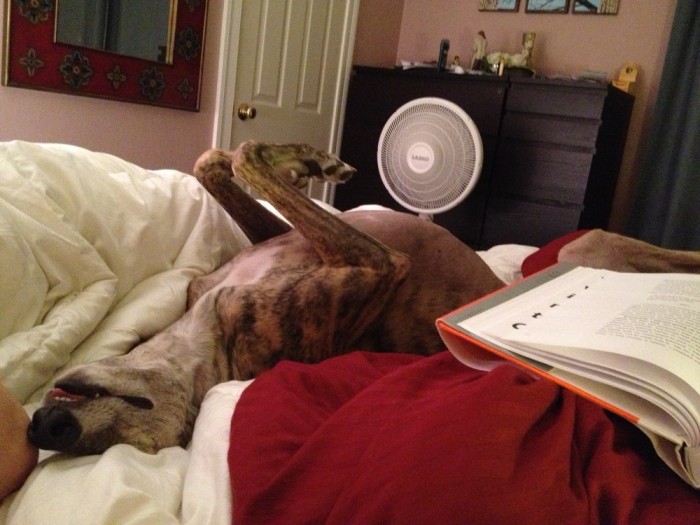 The adoption of Apollo was a major turning point in Nina’s painting career. Before she adopted the furry fella, Nina was painting everything from whales to human portraits. After Apollo, Nina can’t stop painting animals– especially dogs. During that turning point, Nina started making custom pet portraits for others and her business took off. 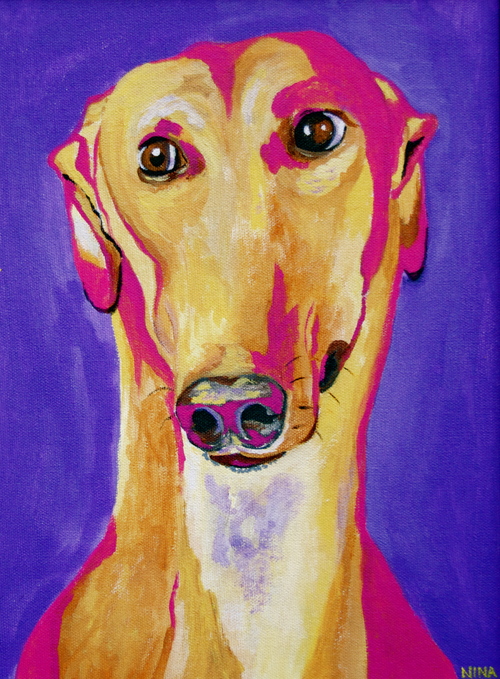 For her pet portraits, Nina has collectors all around the globe. Her animal paintings are known and celebrated for their vibrant colors, rich tones, and Nina’s ability to capture the essence of her subjects. 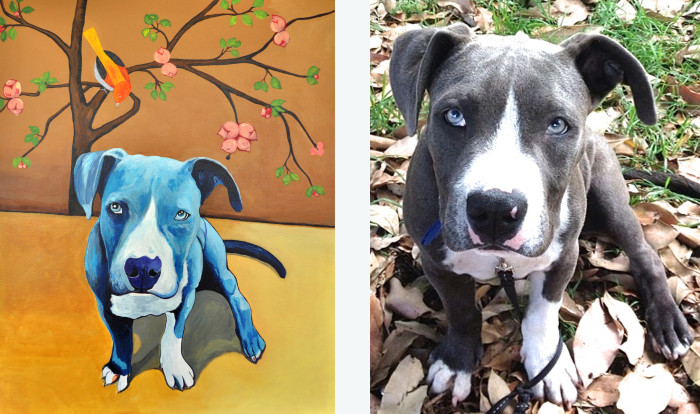 This is Ducky. Sometimes Nina will get a really blurry picture from a collector who might have lost their pet already or have had a bad photo of an amazing pose of their pup that they just really love. This was true for the portrait of Ducky– Nina really wanted to capture the look of one ear up and one ear down. 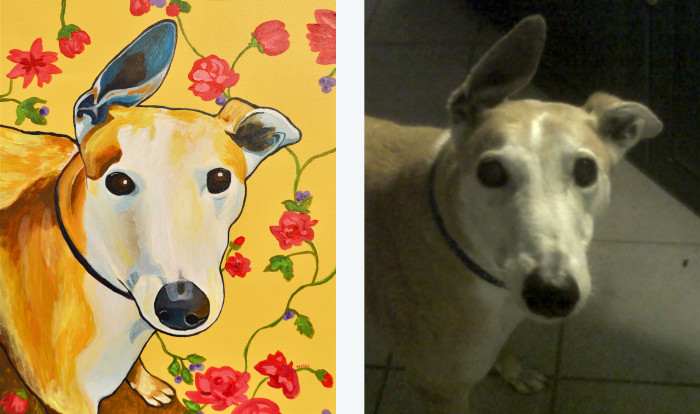 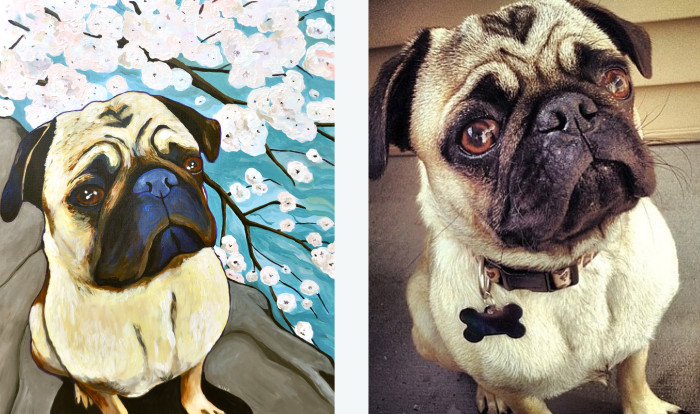 In addition to creating custom pet portraits, Nina has also been working on self-publishing a children’s book about a little boy named Briar going through emotional struggles because his mother left him. Through Briar’s story, Nina shows the beautiful relationship between humans and dogs and how they can mutually rescue each other. 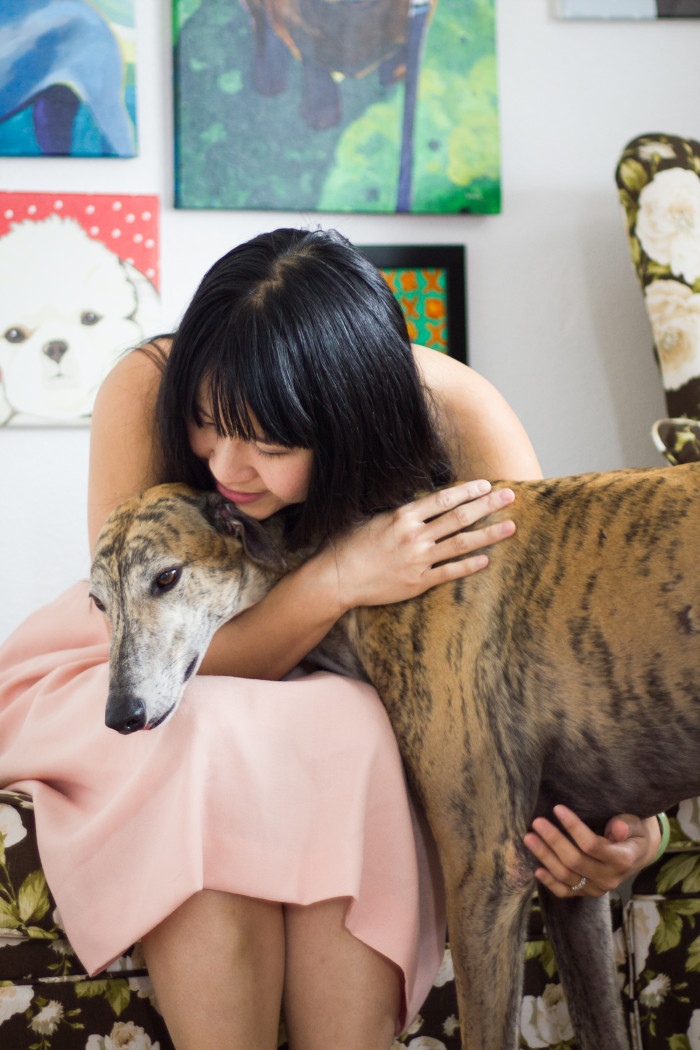 Since it is incredibly difficult and slow to get a children’s book finished through a publisher, Nina decided to publish the book on her own. It launched on Kickstarter yesterday, October 14th, and you can help make it successful! Nina also gave The BarkPost a sneak peek into some of the pages in the book so that you can see some of the incredible story for yourself. 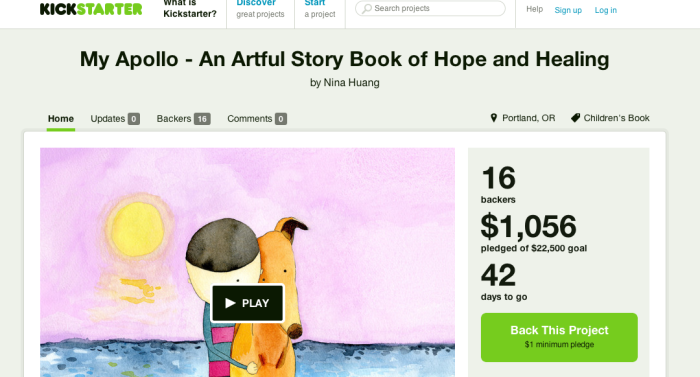 This is the first page of the book with Briar standing alone in his room. He’s feeling lonely and sad, and the tree is bare. It has been a long winter, as he struggles in school and realizes that his mother might not be returning home. 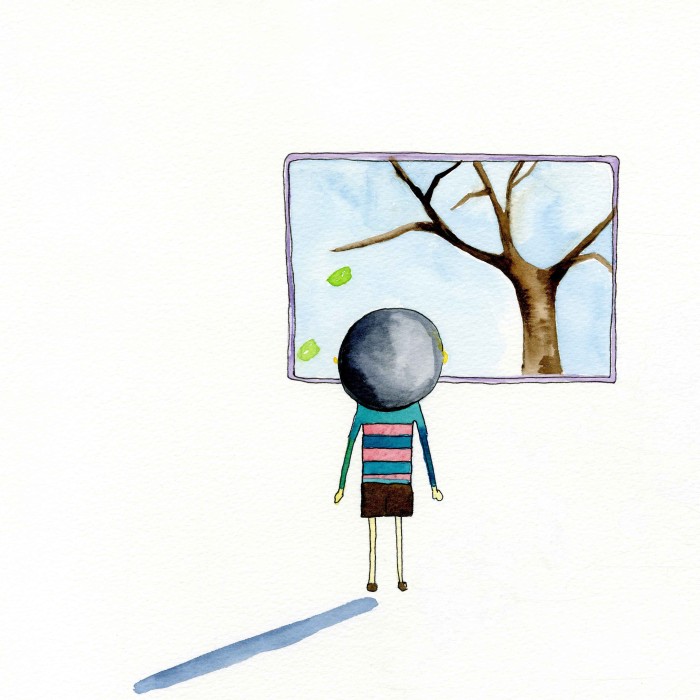 This is the 4th page in the book. After a demoralizing meeting with Briar’s school teacher, Briar’s dad decided to take him to the dog shelter and allow him to bring home a rescue dog. Briar meets the greyhounds for the first time, and notices all the different colors and patterns they come in. Out of all the beautiful dogs, he chooses the most timid and troubled dog, Apollo. 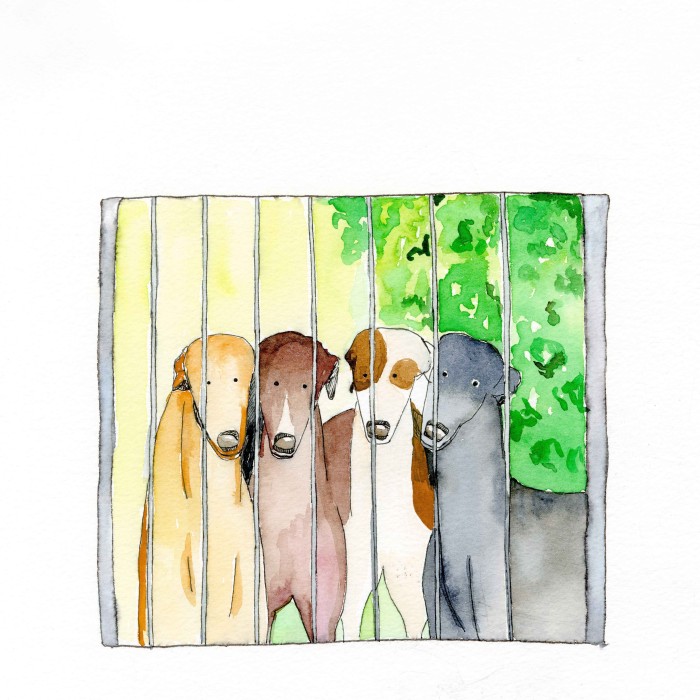 The 8th page of the book. Briar is home with Apollo, and he reaches and tries to pet him. He observes that Apollo has an intense fear of being touched by a human. Every time somebody tries to touch Apollo, he shakes and hides. 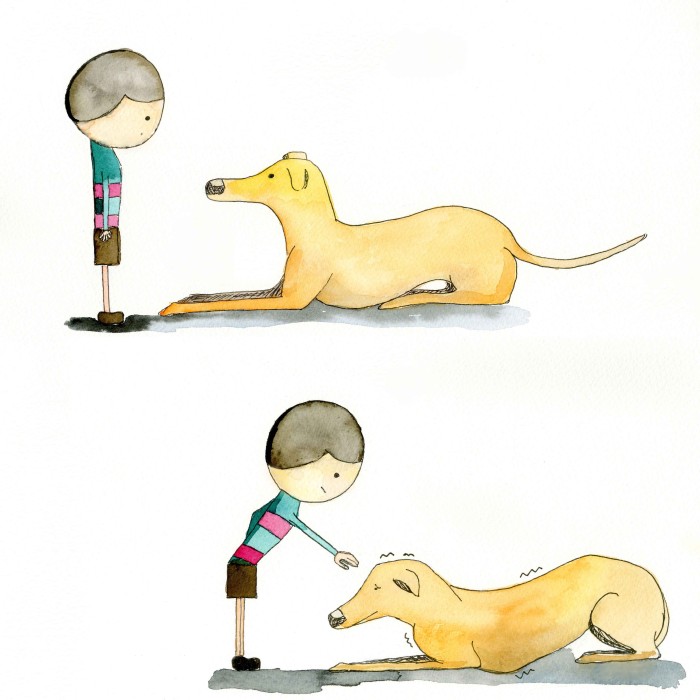 Slowly, Briar helps get Apollo to come out of his shell. In this spread below, Briar takes Apollo out for a walk, something Apollo LOVES. 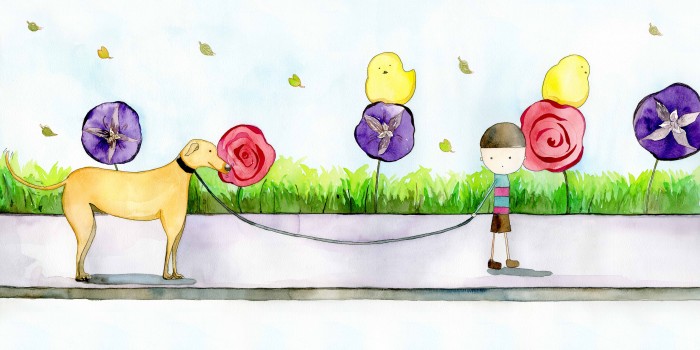 Later in the book, Briar really starts to learn how to take care of Apollo and Briar makes a bed for Apollo in his room to show Apollo that his safe place is with him. 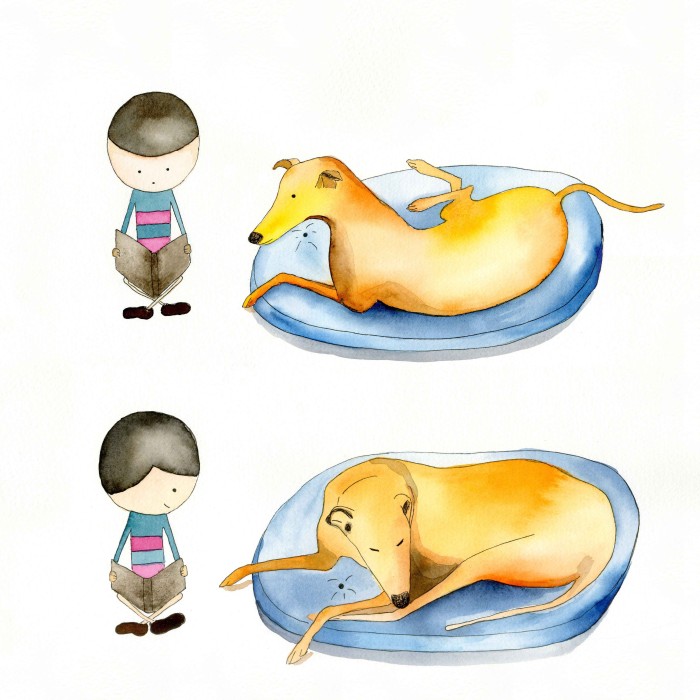 To read the rest of the story, you can head over to Nina’s Kickstarter page and pledge $25 to get the book when she reaches her goal. Here at The BarkPost and Bark&Co., we want to do everything we possibly can to help spread the word about folks who pursue their passions and are sharing the rescue ruv. ♥

For Nina, while the path to becoming an artist and an author has been a windy one, she believes that everything happens for a reason.

“I believe that life is always nudging us to follow our heart’s truest desires, and sometimes the nudge can feel like a rude shove (as was the case for me). But if we listen and hold our faith, the path unfolds, and the Universe provides generously.” –Nina Huang 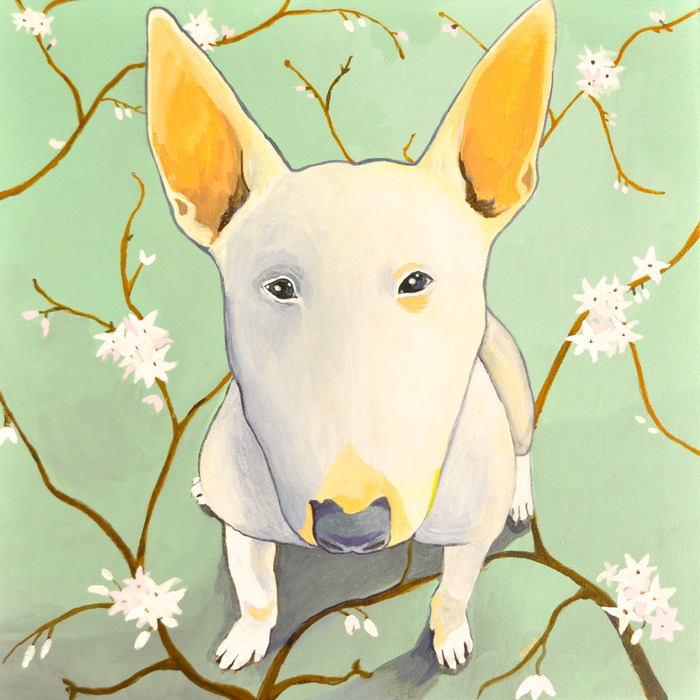 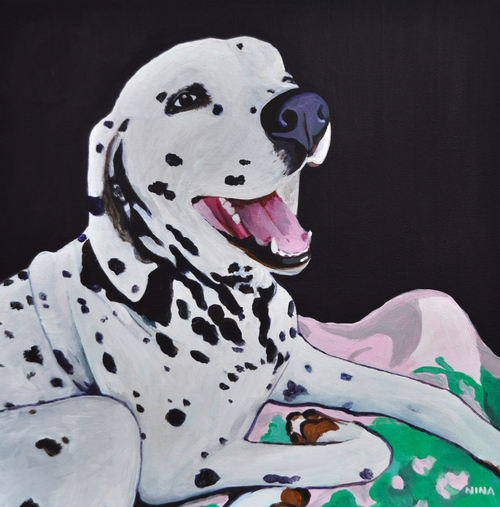 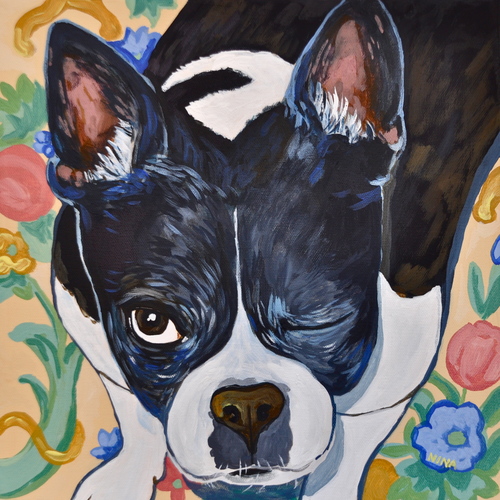 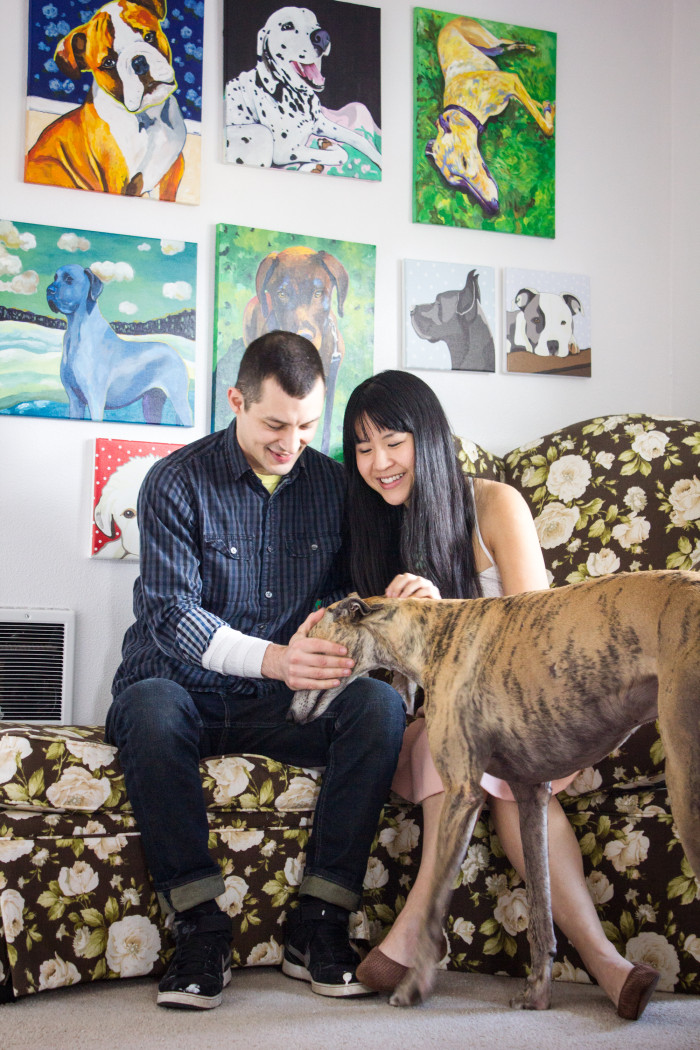